The chief executive of the largest online exchange for cryptocurrency, Binance, criticized the former CEO of bankrupt exchange FTX and took aim at economist Nouriel Roubini.

Appearing at the the Milken Institute’s Middle East and Africa Summit on Thursday, Changpeng Zhao, known as “CZ”, was asked to respond to a tweet by Sam Bankman-Fried in which he referred to a “sparring partner,” largely believed to be CZ.

“When he tweets about a sparring partner, his house is burning and all this is happening, he’s losing focus. I didn’t know this problem existed in FTX before otherwise we would’ve sold those FTT tokens a long time ago,” he told CNBC’s Dan Murphy.

“That day when he tweeted that, he should have been working on other things. He should not be writing tweets.”

Zhao also added detail about Binance’s decision on Nov. 9 to back out of a deal to rescue rival exchange FTX.

“To be quite clear [Bankman-Fried] came to me. When he came to me I knew he was desperate. So probably a bunch of people passed on the deal before us,” Zhao said Thursday.

“It didn’t take us very long to figure out there were way bigger problems [at FTX] than we imagined,” he added.

Binance’s Co-founder & CEO Changpeng Zhao has given several interviews discussing the outlook for cryptocurrency following a turbulent couple of weeks in the market.

When asked if he thought the former FTX CEO was a criminal, Zhao said he would leave that judgement to other people but said he “[knew] there have been lies and there has been misappropriation of people’s funds” which he described as “fraud.”

In a separate interview with CNBC’s “Squawk Box” Thursday, Zhao said he was “very shocked” when he found out about how Bankman-Fried behaved.

CNBC has contacted FTX and Bankman-Fried for a response to the comments but has not yet received a reply. 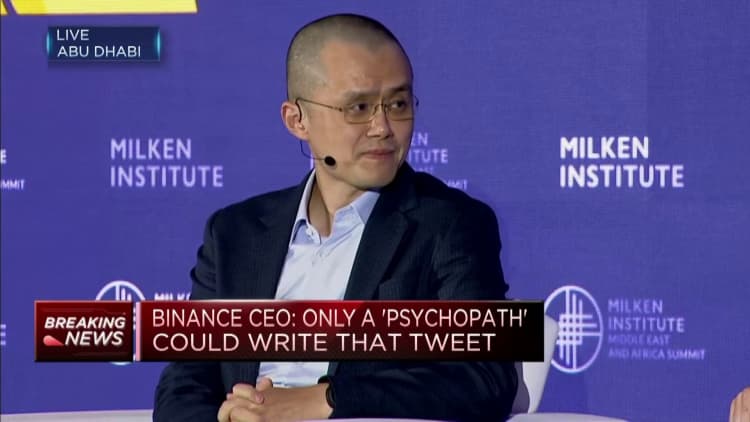 Economist Nouriel Roubini also came up during the interview after he described Changpeng Zhao as one of the “seven Cs of crypto” – an unflattering list which also included “concealed, corrupt, crooks, criminals, con men, carnival barkers.”

Roubini described crypto and some of its major players as an “ecosystem that is totally corrupt” at an Abu Dhabi Finance Week event Wednesday.

Zhao’s response to the criticism was simple: “We don’t care,” he told CNBC on Thursday.

“Negative energy doesn’t make it far in life and those people will generally stay poor,” he said, implying Roubini was “very impolite” and somebody who “doesn’t know the local custom.”

In response to a request for comment, Roubini directed CNBC to two tweets in which he criticized Binance and Zhao for enabling Iranian firms to process transactions worth $8 billion, despite U.S. sanctions. Binance said at the time that it froze transactions when it became aware of the issue. 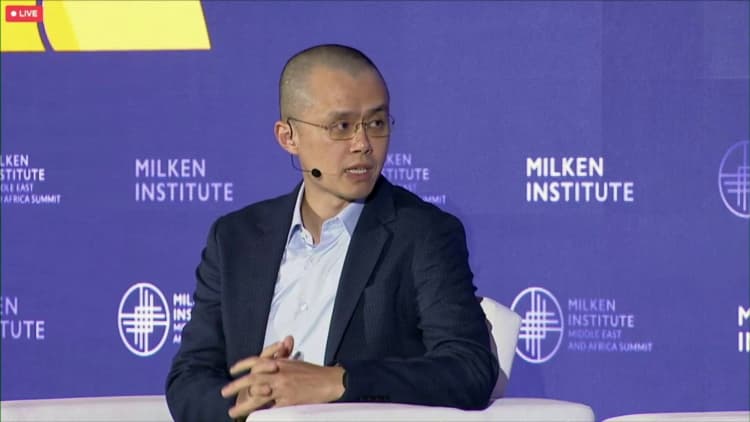 CEO Zhao has had a busy week of speaking engagements, and on Wednesday said cryptocurrency “will be fine” after he announced plans for a recovery fund for people who hit a rough patch in the industry.

Cryptocurrency has been in the limelight this week after FTX declared bankruptcy Friday and the price of bitcoin dropped below $17,000 for the first time since 2020.

The events also triggered concerns the so-called crypto contagion could lead to the downfall of other big industry names, such as Crypto.com. The company’s CEO denied the claims and said the platform was “performing business as usual.”